Physics is the study of the Universe itself, from the smallest sub-atomic fundamental particles and energies, to the majesty of galaxies travelling through the depths of space. It is a quest to find out the rules of the Universe, and how we might harness them or better understand the world around us. It is a practical and a theoretical subject and its study changes the way you look at both natural and man-made phenomena. It is also the exploration of the history of reality as we understand it and the development of complex ideas, from the musings of the Ancient Greeks, through to the breakthroughs of Rutherford, Bohr and Einstein in suggesting the quantum world. It offers the potential to reduce or solve many of the Earth’s current problems, such as in clean energy generation or ever-improving communications; medical physicists work alongside clinicians to come up with new ways of studying and understanding the human body; and our fascination with the Heavens drives us to further explore our Solar System and the wider cosmos.

At GCSE students now have the option of separate or trilogy science; the former is recommended for those already considering A-Level sciences (and the degree options that go with them, including medicine). Trilogy is composed of a mix of one third of each Science, but should not be considered easier as such; the content in many cases is the same, albeit to not the same breadth as separate physics.  Both physics courses study Energy, Electricity, Particle Model, Atomic Structure, Forces, Waves and Magnetism and Electromagnetism; separate physics also studies the Space topic.

We follow the AQA specification for both separate and trilogy courses. For both, assessment is via two linear exams at the end of the Year 11. Separate physics gives a standalone GCSE grade; in trilogy the three sets of science results are combined equally to give a dual-grade award, such as 7-7.

At A-level we follow the content-led OCR Physics A course, which is split into four main topics over the two years.  It is a flexible approach, where the specification is divided into topics, each covering different key concepts of physics. As learners progress through the course they will build on their knowledge of the laws of Physics, applying their understanding to solve problems on topics ranging from sub-atomic particles to the entire universe. The Practical Endorsement (“PAGs”) will also support the development of practical skills through the course. OCR’s A Level in Physics A specification aims to encourage learners to:

The course is linear, with three exams at the end of the Upper 6th year. The first two cover two of each the four topics; the third (“Unified Physics”) can have questions on the whole two years. Many students who study physics go onto to study Engineering, pure Science or Medicine at University, though an increasing number go into Computer Science, finance, economics or even Law.  A good physics A-level gives students many options as they move on from Saint Ambrose College. 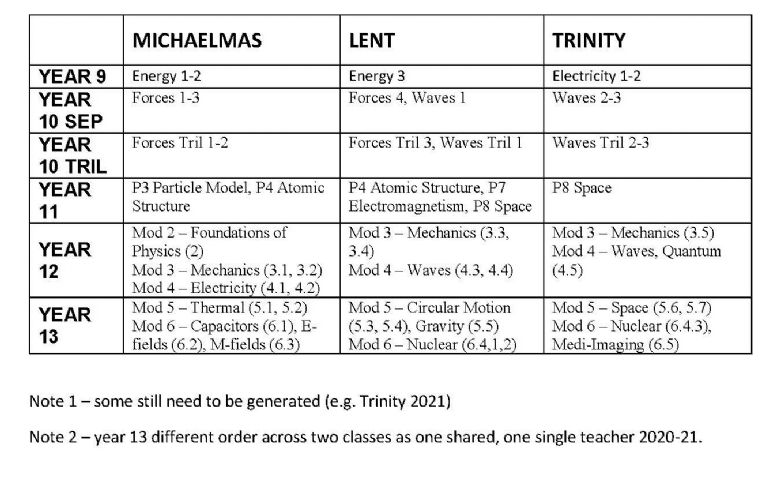